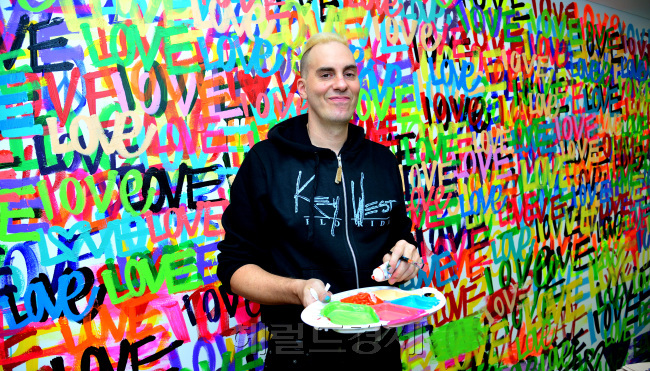 Chris Riggs for Mayor is contemporary NewYork City artist, whose art works are based on a unique combination of cubism, abstract, surrealism, minimalism, pop and street art has made him a leading artist of his generation. His paintings and sculptures are in museums, galleries, and private collections in over 50 countries.

Chris Riggs for Mayor was born in Manhattan, New York in 1973, and studied painting and political science at New York’s City College and Columbia University, New York. He lives and works in Miami and New York.

Chris began his career painting when he was three years old with his grandfather who was from Italy. At age 11, Chris’ medium was aerosol, painting murals in the abandoned buildings and train tunnels of New York City. At age 17, Chris traded in his spray cans for a paint brush. Since the mid-1990s, Chris Riggs has been making complex abstract paintings and sculptures. In 2004, Riggs decided to run for Mayor of New York City because he saw an injustice: Bloomberg cut the school lunch program. This angered him, and he decided run for Mayor of NYC and change the city through his artwork. In 2005, Riggs played himself as a mayoral candidate for New-York City in documentary movie “The Promise of New York. “ He started to create art under the name Chris Riggs for Mayor.

He executes his political city-based paintings and sculptures in acrylic and spray paint. Chris associates the vivid colors and geometric shapes he uses with the City’s unique vocabulary and palette, and, most importantly, its politically active, changing the world, dynamic.

Chris Riggs creates sculptures and paintings that function as a political vehicle, using domestic materials charged with significance and suffused with meaning accumulated over years of use in everyday life. Chris Riggs for Mayor abstract canvas and sculptures deals with energy of personal fears, hopes, political fighting, sexual relationships, solitude, cartoons from the past, fun street time, death, happiness, dreams, and city memory.

ABOUT CHRIS RIGGS FOR MAYOR ART:

“A former “street boy” who enjoyed spraying graffiti on the walls, Riggs is now considered one of the leading artists of his generation. One of the pieces was sold for a record US$50,000 recently”.
– The Korea Herald, Seoul,South Korea

“Chris Riggs, an American artist who is carving out a presence around the world with his works full of peace messages, came to Korea this week to speak at the Herald Design Forum 2014 at Dongdaemun Design Plaza in Seoul.”
– The Nation newspaper, Bangkok, Thailand

“Chris Riggs for Mayor is currently one of the most famous artists in New York City.”
– artId.com

“His work is collected by museums, galleries, and collectors in over 50 countries.”
SaatchiOnline.com

“I have been working as a full time artist since 2005. I started doing graffiti in 1985.”
-Chris Riggs artist

“Chris Riggs is the middle-finger-loving mayoral candidate for New-York city (a.k.a. The Punk).”
– The Promise of New York, documentary film

“…it is the eccentric Riggs who steals the show.”
– Nigel Chiwaya, Queens Ledger newspaper, Film Review The Promise of New York

“Chris Riggs decided to start running for mayor because he saw a lunch program cut from a school program. It angered him, and he decided to do something about it – like, run for mayor. He also wants to end the war. He thinks this country needs a “fucking revolution.”
– Jessica Delfino, Singer-songwriter, Comedian, New York

“I have been seeing a lot of Chris Riggs for Mayor Campaign signs up on NW 2nd Ave lately. Is he running for mayor of Wynwood?”
-Jacob Katel, Miami New Times

“Don’t be afraid to fight for your country!”
-Chris Riggs artist, The Village Voice, NYC

“I think your work is fantastic!”
-Liz Hall, TurningArt.com

“Chris Riggs is originally from NYC and draws his influences from street art, pop art, Picasso, Basquiat and many others, and imbues his work with his own exuberant style! SPECTACULAR!!!”
– Sheri A Friedman, Blu Moon Studio

“Seriously! It’s not about the who’s who, but about the “who”. Let us meet Chris Riggs. He’s an artist who paints with geometric shapes and vivid colors, acrylic and spray paint on canvas, and has a mindset for making a wall come alive.”
– FramesUsaAndArtGallery

“Chris Riggs latest show is called “A Journey Through Shapes and Colors.” This show will be part of the Bird Road Art District gallery night, which takes place every third Saturday of the Month”
– events.miamiherald.com

“I was in a high end auction tonight with Andy Warhol. Both of my paintings sold but Andy’s sold for more.”
– Chris Riggs, artist